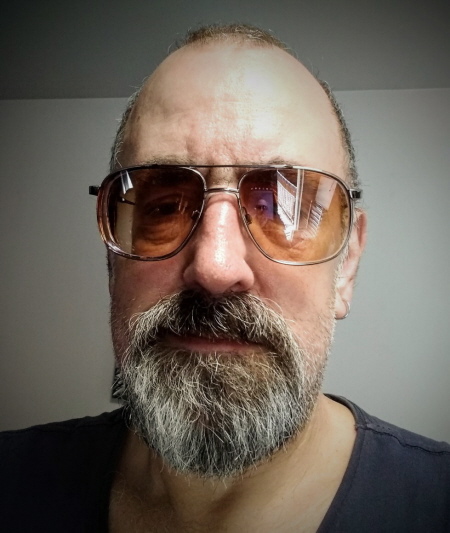 Everyone is familiar with that old saying: bigger bang for your buck. And Jason Sunderland is a man who practices that mantra by using legacy electronics at bargain prices to bring big sounds to his guitar.

Sunderland is an electrician by trade who is turning his skills and hunger for knowledge into practical applications. Using legacy electronics, he builds pedals to create particular sounds for his guitar — and for other players too. It may be an echo or fuzz or a wave or something really unusual. Perhaps that sound will give a piece of music that special something. And he does this by building his own pedals considerably cheaper, in most cases, than the music store. A basic pedal in the guitar shop starts at $80 and typically costs about $200; even with 150-parts in a single pedal, he can save a bundle. When he's done connecting circuits and transistors, it looks like this:

Pedals and Other Things

Sunderland is the proverbial “jack of all trades.” His full-time job is making sure the people who build Boeing Airplanes in Everett, Washington get the parts they need. A typical Boeing jet contains more than a million pieces which means Sunderland has a pretty good memory. A wide swath of knowledge and a well-organized warehouse helps. An electrician by trade, he ended up doing parts after an accident left him disabled. Anyone talking to him will never guess he is disabled at anything. Building pedals with legacy parts and other small pieces is just one part of a man with a thousand pursuits. I suggested in a conversation with him that he might be a polymath.

The questions draw a laugh and an explanation of his past.

“I built a tattoo machine, worked as a diesel mechanic, taught music history for Time Warner, and had five paper routes when I was a kid. I describe myself,” he says with another laugh, “as severely auto-didactic.“

He had a mountain of research in front of him to tackle this job.

“I had to do a hell of a lot of studying (before I build these things). I have a foot-high pile of old schematics that I've studied to build this stuff. And, of course, you have to modify because you're using different voltages for input and output. It's very complex.”

It's the price Sunderland pays for the right sound on just the right chord. The best way to do that, he says, is to build his own. He took a self-taught course on capacitors, transistors, and those little pieces it takes to create sound. He won't lack for parts in the immediate future because he has thousands of capacitors and transistors in his workshop. Nearly all the parts in his pedals are legacy. They don't make a lot of these small non-silica parts anymore, so he searches surplus warehouses like PartsMine. He found most of the parts he needed on the website.

He bought a lot of Germanium transistors (45 from Parts Mine) because they have, in his words, a high failure rate. However, 90 percent of those he bought from Parts Mine were just fine. Most of PartsMine's inventory is surplus but unused and of high quality. There are newer parts, but they are silica-based, which creates a different sound, according to Sunderland. He likens that sound to be more brittle and piercing but is first to admit it's largely a matter of taste.

“They don't make germanium transistors anymore,” says Sunderland, carefully articulating the word, so I don't confuse it with the flower. “You have to pick them up from places that still have them in stock, usually countries like Estonia, Bulgaria, and Hungary.”

In most cases, he was happy to get most of his materials from PartsMine, which ships the same day of the order.

He is also the dad of a daughter with special needs, allowing her extra time. Twenty minutes a day is given to his pedal-fetish, which isn't much, but family is always first. His wife works in special education. And he has other things to work on.

“I restored a 1947 Delta Band Saw, too.” he tells me, apparently stealing time from those other projects.

The picture erases even the tiniest seed of doubt that Sunderland knows way too much about everything. I will call him in a few months to see what he has added to his project list for no reason other than to renew my suspicions that I have been sitting on the couch for too long.